It’s been a few months since its completion, but I finally got around to making this post. Here’s to the release of Sudoku! 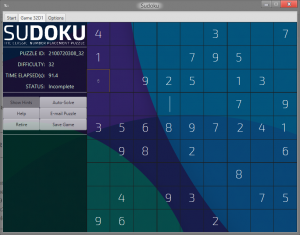 Check it out at Github, where you can also download it.

Sudoku is an old number-placement puzzle, originating with recordable evidence during the 1800’s from an experiment with magic squares. The objective of Sudoku is to fill a grid with digits between 1-9 – the catch being that no two are to be repeated in a row, column, and individual 3×3 square. The end result can be compared to that of a Latin Square, a collection of elements with a nearly indistinguishable pattern.

This site uses Akismet to reduce spam. Learn how your comment data is processed.