Diagram/Flowchart representing the flow and/or transformation of data in a system.
Data is input through an input device that takes information input from a user, and converts it into binary data. This data is then processed, similar to solving a math problem, depending on what the problem is. The transformed data is then either stored temporarily in Memory during this processing, and after, stored permanently in Storage. Or, the data is sent directly to an output, such as a Monitor that relays the data back to the user.

Pieces of code that have been molded into a dynamic program that can interact with the user and preform its own designated tasks.
There are many different types of software designed for users to utilize the processing power of computers. An example of a type of software that does so would be Microsoft Office. This software suite comprises of many different applications, all of which make completing office tasks a breeze. An OS (operating system) is a package of software that makes up a very friendly (and today, graphical) interface in which a user can interact with a computer system through the usage of peripherals.

What makes a computer subsystem, it’s functionality, and how it preforms.
A PC’s design and performance depends on the specifications of its hardware. Most computer systems in production are made to preform specific tasks, and these days, run certain programs. We learned in class of these specifications, and what creates a computer system that can fit our needs. In a world where a piece of technology is considered “latest” for only a few weeks, it becomes difficult to keep updated. The PC Build assignment we did led us directly into the world of computer systems, where we studied and researched multiples of components that build a computer system. A subsystem, or a computer component, is nothing to us without its specifications of its performance. Specifications such as data transfer speed, storage capacity, and form factors are all utmost requirements when considering the designing of a PC.

After exploring the inner workings of a desktop PC system, it was time that we dwelled into the inner workings of a more mobile (and these days, common) computer system – a Laptop PC. The following image on the right is of a Toshiba Satellite Pro 6100 that we investigated software-wise, and examined internally hardware-wise. This laptop was over a decade old, which made its 250MB of memory reasonable.

In general, a laptop PC is more difficult to upgrade/maintain than a Desktop, as the parts are smaller and tightly packed together. This makes accessing certain things more difficult (for instance, the memory is under the keyboard). The size of the parts as well are greatly sized down for laptop devices (e.g. a 3.5″ HDD to a 2.5″). With the difficulty of maintenance, there is also the difficulty of safety as many of the small components in a laptop PC are susceptible to ESD damage. One can also damage themselves by being cut or pinched in a tight area. 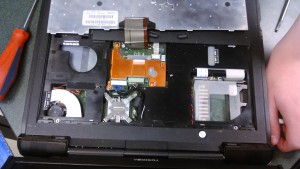